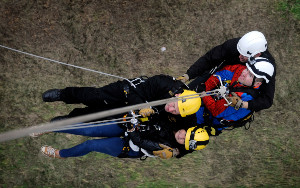 During September 2017, we hosted a unique event that allowed local charity fundraiser Jason and his wife Elizabeth to abseil off the Humber Bridge. 41-year-old Jason was diagnosed with Motor Neurone Disease over five years ago, leaving him virtually paralysed and confined to a wheelchair.

Although every day proves a battle for Jason, this doesn’t inhibit what has already been achieved by Jason himself, his wife Elizabeth and the family. Since his diagnosis, Jason has raised thousands for charity by undertaking some crazy challenges and achieved some remarkable feats including;

By undertaking this challenge Jason and Elizabeth raised in excess of £8,000 for the Motor Neurone Disease Association and the Fire Fighters charity.

Having already achieved some amazing feats the Liversidge family are a true inspiration having supported charitable organisations such as Dove House, Marie Curie, the motor neurone association and others.

HFR Solutions CIC were delighted to play a lead role alongside Jason and Elizabeth in this large logistical challenge and it would not have be possible without the support, help, and input of several parties including The Humber Bridge Board and Humberside Fire & Rescue Service (HFRS).

Jason and Elizabeth Liversidge have previously been profiled on the BBC One TV programme DIY SOS.